It’s hard to believe that it’s been twelve years since my life did a complete 180. My oldest son made a surprise early arrival and has been keeping me on my toes ever since.

It’s amazing how you have a plan for your life, the unexpected happens and you’re left with two choices: wallow in the disappointment or pick yourself up and keep pressing forward and upward.

I remember finally being able to leave the hospital with Michael a week after he was born and my car broke down about a mile from my apartment. Mid-August. In Central Texas. In the middle of the afternoon. No cell phone. (Flashback – remember pagers and pay phones?)

There were some choice words. And tears. Lots of tears during that emotional season. But I picked my baby boy up and started the trek with what was absolutely necessary. I’m so thankful for the guardian angels that were sent my way during that period. About 3 feet from my car, someone pulled over and helped to load everything up and took us home. I quickly learned that it was okay to accept help and that I did not have to do it all. 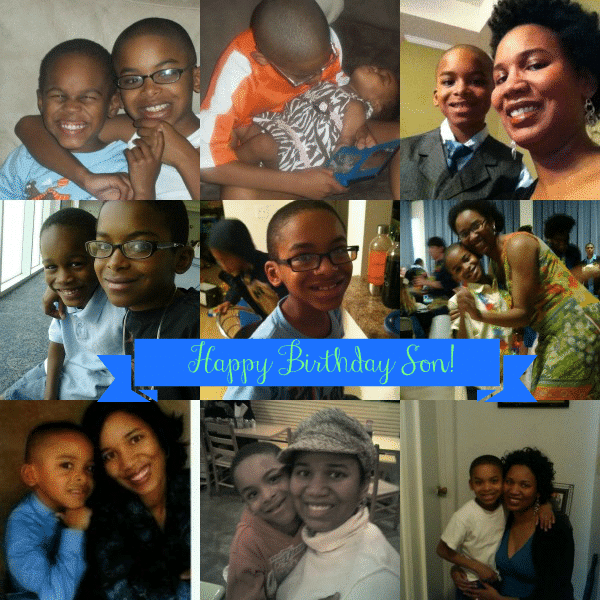 I can honestly say that we’ve grown up together. I had him at a young age and learned the meaning of “true love”. I became a statistic when I had him – single, young, black mother – but refused to let that define who we were and what we were destined to be.

Am I a tad bit harder on him? At times. I was the oldest and I try to be cognizant of not putting too much on him, but teaching him how to be responsible and appreciative. Sheesh, this parenting thing is hard work! But the rewards are so worth it!

He’s an awesome big brother and has the most caring and attentive spirit when it comes to his family – especially his little sister. I look forward to watching how their relationships and friendships flourish over the years.

Today, I pause to thank the good Lord for blessing me with this awesome kid.

Have a fantastic day, Divas!

Happy Birthday to your son! May his wishes come true.:)

Birthdays with your kids are so much fun! Great pics

Oh time flies! Happy birthday to your son. You have beautiful children!

Loving celebration of a precious life and a beautiful family!