The puzzle piece ribbon is the most widely recognized symbol of autism awareness. The puzzle pattern reflects the complexity and mystery of the autism spectrum.  The different colors and shapes represent the diversity of the people and families living with the condition.  The brightness of the pattern signifies hope that through increased awareness and through early intervention and appropriate treatments people with autism will lead fuller lives. 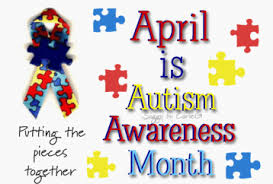 A friend and fellow blogger shared the following with the Divas With A Purpose community during our Thankful Thursday Facebook Event last week:

I’ve said it before and I’ll say it again and again until I’m blue in the face. I’m thankful for AUTISM! It has changed my life in too many ways to name (good and bad). My eyes have opened and my heart has grown larger than I’ve ever imagined! – Benita, Our Autism Files

Her statement hit home and really touched me. Having a younger cousin that’s been diagnosed with autism – I can definitely relate.  There are times when it can be frustrating to communicate with him, but there are those moments where he’ll reach for your hand or come cuddle up with you and even though he cannot express the words verbally – the love comes shining through.  He’s taught me (and my children) to be more patient and tolerant.

Whitney, over at Cafe Mocha Reflections and a participant in The Divatude Challenge 2013, shared her perspective on autism, how it’s touched her family and what she’s doing to support the cause this month.

Light it Up Blue on April 2nd

Each April 2, Autism Speaks celebrates Light It Up Blue along with the international autism community, in commemoration of the United Nations-sanctioned World Autism Awareness Day. Light It Up Blue is a unique global initiative that kicks-off Autism Awareness Month and helps raise awareness about autism. In honor of this historic day, many iconic landmarks, hotels, sporting venues, concert halls, museums, bridges and retail stores are among the hundreds of thousands of homes and communities that take part to Light It Up Blue.

I used to work in an elementary school as a Special Education paraprofessional and there was one autistic student I worked with who was so bright...she was one of my favorites!

Thanks for sharing about this link up with me! I just linked up my two posts in my What is Autism? series. Thanks for helping to spread the word about this cause.

You're welcome! Thanks for stopping by and linking up!

My son has autisum. We caught it early. He was 2.9 at the time and now he's 13. He's the light of my life and truly teaches me to live unconditionally. I've found that not focusing on what he can't do but making big deals of what he can do is soooo motivating. Slowly, we've incorporated his can't do into can do's in preparing him for adulthood. It's challenging but so rewarding. What I"ve learned from him has been amazing. I've always considered him a new soul that God sent to us.. How honored I am that God chose me to be his Mother.

That is awesome! I love your approach and outlook. Thanks so much for sharing!

Can I grab the image above? I would love to put it on my blog. I have a son with Autism. Thanks!

Please do! Thanks for stopping through

My nephew has Autism. We did not know that this is what he had till he was quite old. Thanks for sharing this. I do agree that you learn infinite patience when faced with this, but your love grows more than you ever thought it could.