I’m excited to bring you information on the The REAL Awards for the second year in a row.

Last year I share how The REAL Awards were near and dear to my heart, my mother is a registered nurse and it was comforting to have her by my side during the birth of two of my children. As a young, new mom, she was always a phone call away with motherly AND medical advice that I could trust.

I ended up having my youngest son a week earlier than originally planned and my parents were unable to change their travel plans to make it to me in time. To say I was disappointed is an understatement. That was an extremely emotional time for me for numerous reasons and that was the only birth of her 9 grandchildren she missed.

The nurse that assisted me after his birth was PHENOMENAL. She could tell that it wasn’t just the typical after-delivery emotions I was experiencing. She talked me through my tears and comforted me when I explained that it was my grandmother’s birthday and close to a year since she’d passed away.

Labor and Delivery was at full capacity plus some that day, but she didn’t try to rush me through the process just to get another body in the room.  I experienced “the shakes” and it scared the nothing out of me. She convinced me I wasn’t having a nervous breakdown and it was my body’s way of adjusting after the drastic hormones change and anesthesia leaving my system. Almost six years later, I can remember her kind words and calming nature at a time when all I wanted was my mom. While she didn’t (and couldn’t) take her place, I’m grateful that I had Nurse Cee all to myself during those first few hours after delivery. 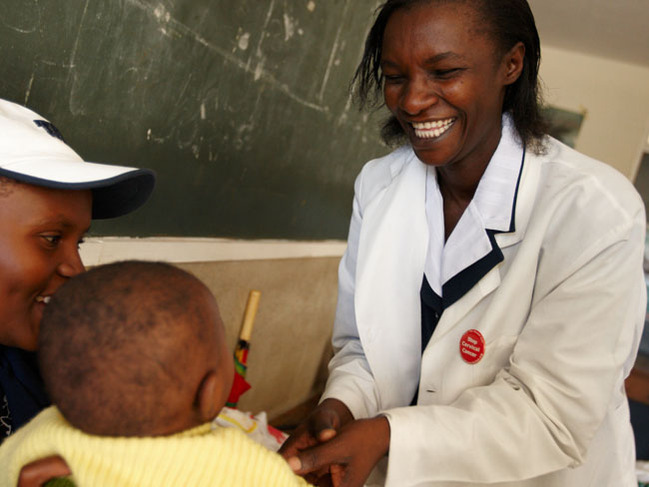 That is the essence of The REAL Awards.  It was created to celebrate the work of a group of people who are often forgotten or taken for granted – healthcare workers saving lives, giving comfort, aid and support across the world.

The REAL Awards is your opportunity to nominate a healthcare worker who has inspired you.  You have until October 25th to nominate someone. Voting will begin October 26th and in January the nominees will be announced.

Is there a healthcare worker that’s made a difference in your life?

a very heart warming piece. thanks for sharing.:)

What a beautiful story. Thanks for sharing, it's very inspiring. I wish my mom was with me during my pregnancy especially the labor day but she's not because she's thousands of miles away from me.

I love the message behind these awards. We need more like this.

If it wasn't for the nurses who was there when I was in labor, I could have lost my first born, gladly they were fast enough to recognize that my baby was in distress inside my womb so they rushed me to a C-section. I salute those dedicated and passionate nurses and health workers.

Thank you for sharing your story. You made me teary-eyed. See, I gave birth to both of my kids via C-section and both those times I didn't have my mom with me, but my husband. I had no other help beside my husband when we got home and it was all shocking to me. She was not around because she is hundreds of miles away from me, half way around the world far from me. I was really emotional and couldn't help it, but cried. The nurses where there to talk to me and comfort me. Plus, my grandma died right when I learned I was pregnant with my first child and she had always been asking me when do I get to have babies. She was always excited to see my kids, but she never did. About a year or so after her death, my grandpa died and I learned I was pregnant with my second one. It was tough, but I survived. :) These people are amazing. I salute these people who are devoted to helping others. Great award!