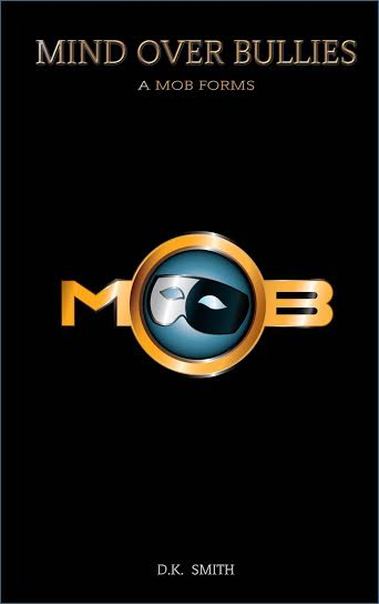 Disclaimer: I received a free copy of Mind Over Bullies: A MOB Forms by D.K. Smith through my affiliation with iRead Book Tours. After reading my review, head here to read the thoughts of others on this book tour and to enter a giveaway for a $100 Amazon Gift Card and one of 5 MOB logo wristbands.

People that feel bullied just need to toughen up. That’s what Margo Rios used to think. Margo is pretty, popular and unsympathetic to just how intense bullying can get. As a counterfeiting plot sweeps through the city of Oak View however, life for Margo changes dramatically.

With the mystery unfolding, an unlikely group of heroes emerges. Bullied teens love them, the police hate them and bullies fear them. Together they will try to get to the bottom of the counterfeiting mystery while ingeniously teaching a few bullies a lesson or two along the way… that is, if the police don’t catch them first.

“Mind Over Bullies: A MOB Forms” follows the lives of several teens chronicling the emotional and psychological changes they experience as a result of their encounters with bullying. The lives of the characters play out while an elaborate counterfeiting mystery unfolds making for a fast paced, action-packed read.

My Review of Mind Over Bullies: A Mob Forms

Mind Over Bullies: A MOB Forms is the beginning of a young adult series that focuses on the different sides and types of bullying. As a parent, I was able to read and appreciate this story and the twists and turns that it took. The story takes place in a high school setting and follows several teens and the adults in their lives as they encounter different bullying scenarios. In one instance the bully becomes the bullied and it’s very interesting to see the shift in thinking – when the realization that others should just “toughen up” or “get over it” is often easier said than done.

The mystery surrounding a counterfeiting ring will definitely draw readers in – there are tons of “wait a minute!” moments to keep you intrigued and guessing what’s really going on. I, personally, would suggest this for older teens or to read it first so you can discuss it with your teen. It’s a great family read that can open the door to in depth conversations on how to handle different life situations.

Interview With The Author – D.K. Smith

A 38 year old native of Los Angeles, Mr. Smith began his writing career after getting news that he would soon become an uncle. Wanting to create stories and characters for his expected niece, he created the children’s book series “Sock n Boots Adventures.” The two characters (three year old Sock and five year old Boots) began to make names for themselves, generating downloads in countries around the world.

When asked about his motivation to tackle the subject of bullying in a 108,000 word novel Smith said, “One day I came across a story in the news about a young girl that jumped in front of a subway train after weeks of bullying. As I investigated further, I was shocked at the number of similar stories I encountered. Bullycide, the news was calling it. I thought, wow, what if these young people had been shown that the pain of bullying can be handled without hurting themselves or someone else.”

Ultimately it was thoughts of his now four nieces and three nephews dealing with bullying as they get older that weighed heavily on the decision for Smith to write the story about bullying. “I recognize that the characters and situations in the book may not represent every bullying situation and that realistically the book won’t change the world, but I do sincerely hope that it sends a subtle message about there being life after bullying. We’ll just have to see how the public receives it,” Smith said.

A lover of mystery and espionage stories, Smith is a fan of everything James Bond. A favorite scenario is to see a character in an impossible situation get out of it at the last second or have the odds against them and see he or she turn the tables. Acting on the love of espionage and mystery, Smith has a new novel in the works centering on a James Bond-type character of his own creation.

Tell us about the cover and how it came about.
I worked with an artist on the symbol when I was planning to turn the Mind Over Bullies story into a comic book. Everyone that saw the symbol loved it. When it came time for the novel, I tossed around different ideas for the cover, but one day I saw the poster for one of the newer Superman movies. The Superman symbol against a black backdrop and nothing else. It hit me, “there it is” I said. After that, it was a no-brainer.

Who designed your book cover?
Going back to first question, I guess, Superman. Lol. But seriously, it wasn’t much to it. That symbol on all black was just so cool to look at. It was simple and easy. I can see it as a movie poster or the end of a movie trailer.

Do you think that the cover plays an important part in the buying process?
Oh absolutely. I can’t tell you how many people have told me that they would buy Mind Over Bullies based on the cover alone. I think a good cover and book preview are essential. The cover draws the reader to the book, and the preview keeps them hooked.

Why did you choose that method?
You have to get directly to the people to get their thoughts. People listen to other people, so word of mouth from the reading community is the best way to go for non-traditionally published books.

Thank you! I truly appreciate your respect for bloggers and understanding the importance of our role.
Anything else that you would like to mention?
Anticipating the release of the book is exciting, largely due to the feedback my publishing company and I have been getting from the public. So I invite everyone to give Mind Over Bullies a look. Read the preview and hopefully it will hook you. Then let me know what you think. I look forward to hearing from the public.

What an awesome review. I hope that taking a deeper look at what happens with bullying victims behind the scenes will help curtail the problem at some point.

Again, I thank you. Lok for more from me soon.