Live Your Truth: Reflections On Life Lessons From My Great-Grandmother

I remember vividly the day I ran to my great-grandmother with tears streaming down my face.

“Child, mind your manners! What’s the matter with you?”

Only it sounded more like “Chile, mek you mannus! ‘Smattuh?” as hearing Gullah in everyday conversations is the norm in the small Lowcountry town in South Carolina my family is from.

“I gave my report on how you were a slave as a child and she told me it was wrong. That you couldn’t have been a slave because the slaves were freed in 1863. She made me write a new report on the freeing of the slaves and she was right!” 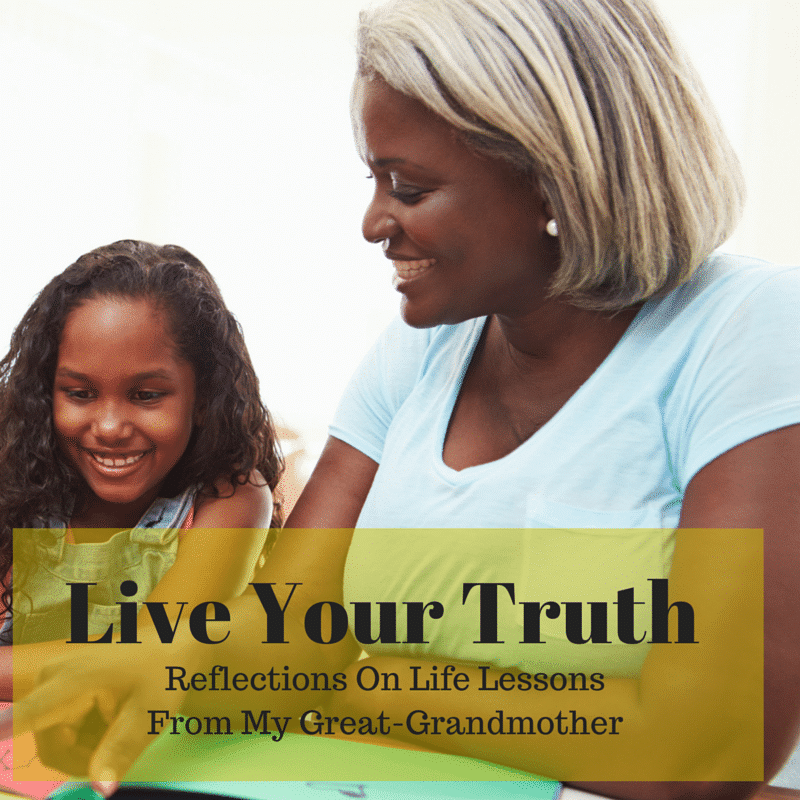 I can vividly remember my 4th grade self being horrified and demeaned by my teacher. We all have memories of our favorite and not-so-favorite teachers and my 4th grade teacher, Mrs. C, definitely fell in the latter list. My class was one of the last she taught before she retired and she was quick to demean and belittle. Throughout that entire year it seemed she had a personal vendetta against me and after I returned to school and stood up for my great-grandmother it didn’t get much better.

But the life lesson stayed with me. Three years later when my great-grandmother passed away I was devastated. I looked forward to sitting by her side and getting her to tell me stories of her life and her thoughts on the ways of the world after living in it for almost 100 years.

I’ve read the heartbroken words of people who personally knew those that were killed.

The day after the killings I comforted an employee who pushed herself to come to work through the shock, the hurt, the pain and the sadness of losing a friend – 26 year old Tywanza Sanders.

An answer I couldn’t give.

Watching the news that night, my 7-year-old recognized that the church was an AME church – a denomination we belong to – and asked if it was safe for him to go to church.

I was at a loss for words.

Live Your Truth: Reflections On Life Lessons From A 98 Year Old

Hate is real. As an African-American woman living in the South there’s no way for me to deny that face. My husband and I are raising two African-American sons. I have nightmares about the horrors they may encounter. The prejudices they may have to face because some will not see the handsome, intelligent young men that they are. They will only see color of their skin.

In the past few weeks my heart has been so heavy as the stories of church burnings, Confederate flags, bomb threats. What year are we in?

“Those who cannot remember the past are condemned to repeat it.” – George Santayana

This morning the Confederate Flag was taken down from the State House in Columbia, South Carolina. For the African-American community it is a symbol of hate. The flag itself has caused economic hardships to the state of South Carolina throughout the years with various groups boycotting the state because of its prominence in our state.

It took the death of 9 innocent souls to bring a call-to-action to have it removed. The removal of the flag is not the end. It’s a start, but there is work, healing and progress that must come.

There’s so much I want to say but the words won’t flow because there is so much emotion, so much hurt that are tied with the events of the past few weeks. These feelings and emotions are ones that have been simmering for generations. And that, that is what is hard to articulate.

I do know that I will heed to the words my great-grandmother gave me over 25 years ago. I will live my truth.

Love this post Michelle. Love it. I feel at peace today. But I'm not reading anymore comments or listening to the news. I wanted to revel in the happiness all day that I felt seeing the flag coming down and hearing the cheers. We can't speak for what will happen tomorrow but today we made history and it's a good day.

I was very happy to be at the State House and watch the flag come down this morning, but deeply saddened that it took the deaths of 9 wonderful people to make it happen. I hope this will be the first in many steps forward for SC.

Gaye - you and I share the same sentiments! I did not realize you were in the Columbia area, too!